Get Ready for the Greatest Adventure 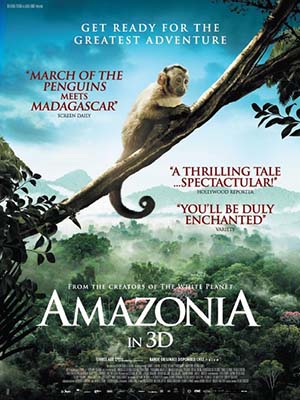 Saï was bred in captivity. After suffering a plane crash, Saï, the little capuchin monkey, and other passengers find themselves stranded, alone, in the vast Amazon Rainforest.

Saï is plunged into his ancestral habitat, which presents a totally new set of challenges: the freedom, the impenetrable green, the abundance of previously unknown plants and fruit, the new predators, crocodiles, boa constrictors, jaguars…

Saï’s only chance of survival is to seek out his own kind and join the capuchin community.

“Amazonia” is the extraordinary journey into the heart of the largest rainforest on the planet, filmed in region that few people have explored. The French director, Thierry Ragobert (“The White Planet”) and his team spent two years on site to capture the fantastic scenery and the multitude of species that live there. The documentary 3D footage was then complied and cut to fit Sai’s narrative. The story is a hero’s tale of drama and overcoming challenges. “Amazonia” is a film for the whole family, an ode to the wonder and diversity of the Amazon rainforest with totally unique and beautiful scenes.