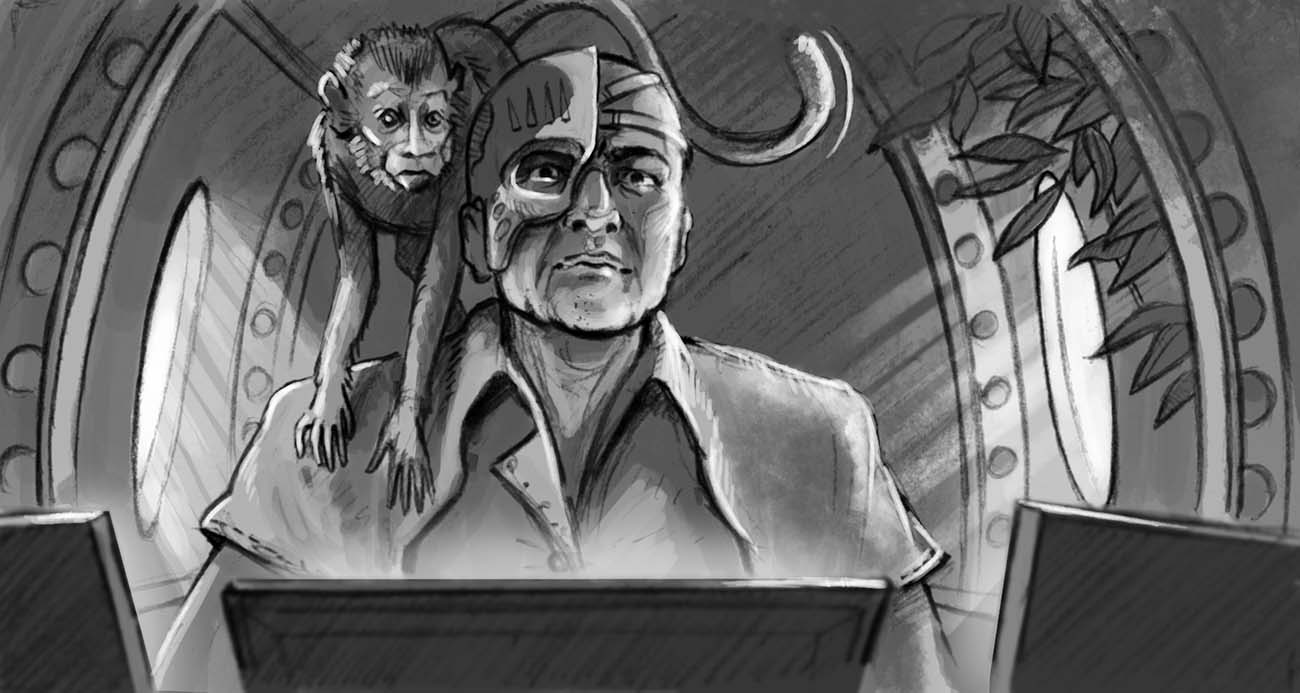 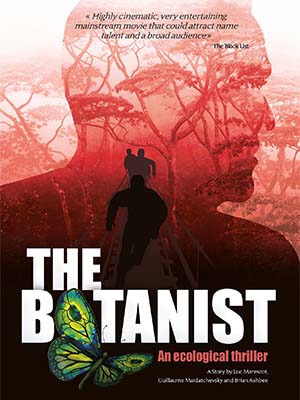 The opening is in the wilderness of a beautiful rainforest, set on fire by the bombs dropped by a helicopter. The second scene is in a New York Courtroom: the trial of a powerful logging corporation on corruption charges is interrupted, when the entire jury is kidnapped overnight and disappears!

A day later, images appear, on all media, showing that the astonished jury – a handful of typical americans – has been whisked away on a perilous voyage through the canopy of the Amazon rainforest, leading them to its unknown beauties. Hidden cameras film the whole journey and some videos reach the world through internet. A mysterious figure, The Botanist, is directing operations from his High Tech dirigible, floating inches above the forest canopy.

What follows is a race against time: can the Botanist move public opinion, which is captivated by the adventures of the jury, to act to save the world’s tropical forests before he is captured by the police or murdered by agents of the logging company?

The script seduced the french Editor Fayard and is being novelized.
The book will be out in 2022

20 years ago I had a strange encounter with a famous botanist up in the tall trees of a tropical forest in Africa.

That Botanist, Francis Hallé, was full of anger, seeing that wonderful ecosystem being cut down or burned. He was trying to fight against the logging companies. It was David versus Goliath.

My only weapon as a film maker, to help him out was to write a movie, a thriller, “The Botanist” to reach people through emotion, and invite them to support Francis’ lifetime fight.

A Story with deep roots

The story “The Botanist” has some deep roots. 20 years ago I met a passionate botanist, Francis Halle, who made me love “his” forest, a tropical one, filled with magnificent biodiversity.

I had already filmed tropical forests before, but I mainly had a feeling of walking within motionless green and brownish areas, with little happening. It was pleasing to the eyes but not to the brain.

Francis explained me all the co-evolutions which had taken place over millions of years in those mysterious forests; Alliances between insects, animals and plants; Adaptation to survive; etc… I discovered that mutual aid was another law of the jungle.

He then took me on an expedition to the top of the giant trees in Madagascar; We slept there a few days, at 45 meters above ground, and it was magic, full of light, birdsong, colorful flowers, fruits and different species of animals, insects… I had to share this beauty.

To help Francis in his fight to save the tropical forests I decided to do my part, and write a feature film, “The Botanist”, to bring a message to a larger public than the one of the documentaries. One does not convince with arguments, one convinces with emotion.

A friend, Guillaume Maidatchevsky joined me in the writing, and it took us 4 years to master the script: an ecological thriller, a potential blockbuster which would help to make things change. We finished the script on the very day “Blood Diamond” (with Leonardo DiCaprio) was released. Sitting in the cinema, at the end of the film, we both looked at each other: we had the impression we had just written “Blood Forest”…

The idea of the story is to film at least ¾ of the movie up in the trees, at 45 meters above ground, so that the public can discover a part of the forest it never has the opportunity to visit.

A perfect setting for an amazing thriller and a special love story.

Our botanist could not invite the whole world up into the trees to show people the beautiful secrets of the forest, so with Guillaume we thought he would turn eco-warrior, kidnap a selection of people whose adventure up in the trees would be followed by millions on their smartphones, tv, social networks… bringing the forest to the very center of their preoccupations.

Many sub-stories came up, and we ended with a riveting story.

The only problem is that the cost of the film was estimated at 30-40 millions of dollars. Too expensive for the French producers we knew. With Guillaume we went back to work on other projects….until the forest recently became one of the main interests for people around the world. The forest is the best ally against climate change and for biodiversity. The ocean cannot grow, as the forest can. It is the perfect ecosystem to save us.

Now, thanks to this renewed interest, we may be able to persuade famous producers, directors, actors, to come on board “The Botanist” project.

An eagle’s view, flying over the canopy of the Amazonian rain forest, through morning fog: an ocean of green foliage as far as the eye can see.

We are following a harpy eagle, plunging through the layer of chlorophyll, zigzagging past enormous branches laden with mosses, flowers and fruit. Our eagle soars once more into the sky, disclosing the magnificent, virgin panorama, apparently stretching to the ends of the earth.

Then a shock: we are flying over a forest giant as it falls to the ground, then a second, and a third. Further ahead, a napalm bomb falls from the sky and sets the forest aflame, spreading instantly through the under canopy, then another, turning the forest into an inferno of flames rising into the sky.

Hundreds of animals are fleeing from the blaze; amid the exodus, the agonised screams of a capuchin monkey holding her carbonised baby cut through the crackle of exploding timber. Another lies in agony, his groans echoing through the forest.

The naked, running feet of a human, skipping to avoid the burning vegetation, pauses beside the monkey. His hand holds a revolver, which fires a round into the animal’s head. The cries cease. Tenderly, the weather-worn, roughened hands, one of them gloved, lifts the smoking corpse and places it carefully in a large jute sack.

For twenty-five years, I have pursued every legal means to stop the pillage of the forest, but to no effect.

The jute sack on his shoulder, the man resumes running, his face still unseen, pistol in hand. Leaping through a curtain of flames, he disappears.

The sounds of forest fire and helicopter fade. The naked feet walk into a simply furnished cabin. The gun is placed on a shelf, next to a photo of a young man and a woman, taken outside the same forest cabin, with three young children.

When you have lost so many of those you love, what is there left to lose?

A patch of garden, at the back of the cabin. A hand - glove removed to show badly burnt skin, now healed - rises to pull on a string hanging from a reservoir of water hanging in a tree. A shower of water descends. The man is taking a shower, washing the smoke and ashes from his body. Beyond his legs, down which the water trickles, there are two graves with simple wooden crosses.

The hand of the man, once more gloved, turns on a number of switches; several small computer monitors spring to life, on one, a helicopter carrying the logo of MACKENZIE FOREST. On another, the face of Mackenzie talking at a news conference. On another, a still of the Court House.

There is still one bullet left in my revolver; in which direction should I fire

We hold on the three monitor images as fast, rhythmic, driving orchestral music takes us into the

Several trucks laden with freshly-stripped trunks are pulled up outside a small village. Men are unloading from a van sacks of colza ready for planting. The van bears the slogan ’SOJA - FEEDS THE WORLD.’

The trucks, laden with massive trunks of timber, roar into life and drive off.

We follow the journey taken by the timber, from raw material to finished product:

- Stripping of branches
- Division into planks
- Treatment with anti-bacterial solution
- Loading into containers
- Cutting into circles, with a hole in the centre

Sitting on just such a beautiful hardwood toilet seat, an elegantly dressed man takes a generous helping of toilet paper.

The man emerges from the toilet, immaculate, and traverses the corridor of the Court House in New York. A roar from a large crowd outside the building makes him go to a window and look down at a jumble of TV outside broadcast vans, and police vehicles with flashing lights.

A limousine with tinted windows stops in front of the steps, provoking a roar of anger from the crowd. The journalists and cameramen swarm around it. A banner in the crowd shows Mackenzie crudely drawn as a tree, legs severed by a chainsaw.

The caption reads MACKENZIE MURDERER OF THE FOREST

This is the first time that a man according to critics responsible for the despoiling of vast tracts of forest will face justice in an American court, thanks to the actions of the radical pressure group Greenspace.

From the limousine emerges a man of around sixty, wearing a business suit with a cigar between his lips. He is noticeably shorter than the guards escorting him and his bad skin and posture suggest a man not at ease in his skin. He raises a beautiful ebony cane and brandishes it cheerfully at the crowd.

From the crowd, roaring in fury, are hurled projectiles which burst on contact with the limousine, drenching it with a viscous liquid. One activist is filling such a projectile from a can, marked ‘NAZIE POISON 1080 HIGHLY TOXIC’.

Protesters here are throwing a liquid, symbol of the 1080 neurotoxic chemical agent, used before by the Nazis, and that, according to ecologists Mackenzie’s company uses to kill the animals and plants of the forest.