Green Forests and The Red Carpet

His fight for the forests drives him to Cannes and Hollywood 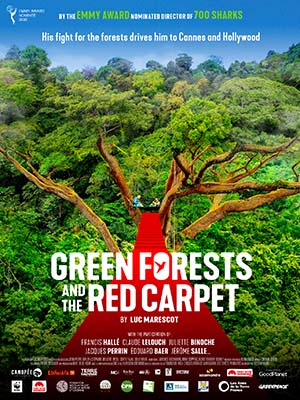 To help the renowned botanist Francis Hallé in his fight for the tropical forests, a documentary film maker passionate with nature decides to explore the movie industry, the cinema.

He wants to achieve a Hollywood Blockbuster, an ecological Thriller, which would reach a larger audience, and push people to act for nature. He envisions Leonardo DiCaprio for the lead role.

By going out of his comfort zone, the filmmaker starts a new and difficult adventure, for the sake of the forests. In between two filming sessions where one discovers him in Amazonia, Gabon, Papua New Guinea, Costa Rica… one sees him making his way with malice and obstination to Hollywood, Berlin, Cannes, Paris, up to the editing room of Claude Lelouch, the office of Juliette Binoche, and many others.

“GREEN FORESTS And The RED CARPET” tells this path, that obsession, and delivers a universal lesson : never give up and hang on to your dreams. This adventure is a suspensfull thriller… with at stake: will his movie – to help save the tropical forests – exist one day?

Feature documentary. Will be released in theaters, in France, on the 29th of sept. 2021

“I met the famous botanist Francis Hallé on an expedition on top of the giant trees of Madagascar 20 years ago, and since then I always wanted to help him. At 83 years old, he has, and still does, dedicate his whole life to protect the tropical forests. Because he knows them so well and knows that humanity depends on their good health. I see Francis Hallé as a Don Quixote of the green ocean, fighting bigger issues than what he can cope with.

So, to do my share, I did 12 documentaries in all the tropical forests of the world. But documentaries are often seen by people already convinced, so I decided to take on a new weapon, one I wasn’t used to: a movie, for theaters. Good movies bring emotions, and only emotions can convinced people to change their behaviours; not arguments.

I may not be the one who will do THE films that will change the destiny of the tropical forests, but it is good that the movie industry does the job and produces movies that move people in a sense that they accept and wish to change their behaviour, to reach a better world, respectful of the nature around us. The nature we are part of.”

“Green Forests and the Red Carpet” is not a movie yet; it is a feature documentary telling a universal story: the one of a man who decides to make things change. And how he manages to reach his goal, from Los Angeles to Cannes, Berlin, Papua New-Guinea, Amazonia, Africa….

It works like a Trojan horse film: the viewer travels around the movie industry, but at the end gets what the film director really stands for: the health of the tropical forests and the lifetime fight of Francis Hallé.

The movie: The Botanist, is the next step.

Some of the participants